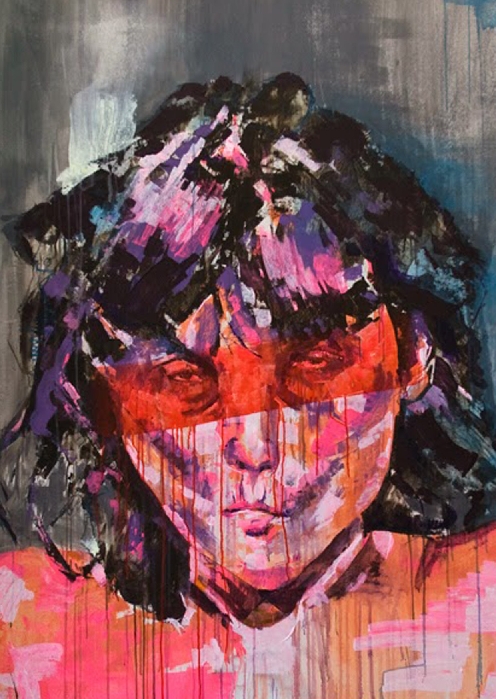 In his first exhibition at Galerie Affenfaust, Mr. Nonski shows works from his current series, which are dedicated to figurative paintings, especially portraits. Different mug-shots, which crossed his path in the internet, became models for his large-sized acrylic paintings. They show images of people, some of them socalled Methheads, who got caught while breaking the law. They live in their own spheres, cannot manage to adapt to the surrounding world and scandalize so heavily they got into conflict with the law.

The instant of getting-caught is the moment when the facade starts to crumble and one can see the real person behind. Nothing can be whitewashed or hidden. These broken figures seem to be exhausted. In a really unpleasant situation, they have to justify their behaviour in front of the state. Involuntarily they are confronted with the reality.

By applying the acrylic paint with a trowel, Mr. Nonski uses a very direct and edged style, which he likes to emphasize with dazzling colours. Only a few shapes are drawn softly with pastel. Like this, nothing is belittled, in fact this way the unpleasantness and brokenness becomes prominent. With partial overpaintings, another level is added, which functions as a curtain, that, despite the strong confrontation through oversized display, separates the shown ones from the outerworld.

Other shown works from his series of yarnpaintings, also deal with portraits, but without existent models. The pictured figures appear like beings from another world. Here the artist uses a process that is unpredictable and spontanious, he doesn´t have a lot of control over the final result. The paint is put on paper with a yarn, then another sheet gets applied and stripped. That produces blurring, which gives the creatures depth and plasticity. Like the work-process i something intuitive, these surreal beings call on the subconscios of the viewer. Confronted with the downsides of others by the mug-shots, the focus of the yarnpaintings is on ones own hidden sides.

Mr. Nonski, born 1977 in Hamburg, lives and works in Hamburg. In his earlyer works he concentrated mostly on graphic froms and elements, which he repetitive composed to figures. Now he is more dedicated to figural painting. Essential topic of his art are individuals marked by society. He is not interested in the beauty of humans, he wants to show the dark sides, the real rawness. He features qualities and moments one normally tries to hide in our society.